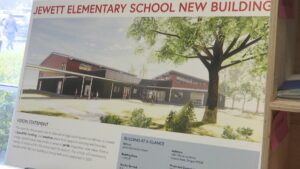 The Central Point School District’s Chief Projects Officer, Spencer Davenport, says the new building is funded by a bond project approved by voters in 2019. It will include a gymnasium and two maker spaces.

One maker space will focus on woodworking, cooking, sewing and more.

The other maker space will be a ‘tech lab’ used to teach coding, engineering, videography and more.

Overall, he says the space is meant to be versatile.

“Kids need to have hands-on learning, they need to learn by doing and so that’s what this space allows us to do. It grants us educational space that naturally gives us the opportunity to get kids doing things,” said Davenport.

He says the building is projected to be complete by August of next year.

It will have a capacity of about 700…

Thank You For Attending the Troxell STEM Playground

Hobbyist adds a hinge to the Game Boy Pocket, delighting everyone