The Palmetto Branch Library is expanding its mission with its new makerspace.

When libraries were first established to archive clay tablets around 2500 BCE, they were private institutions for scholars and the rich elite. Then during the Age of Enlightenment, governments and civil societies, such as Ben Franklin’s Junto Club, created public lending libraries. But even those were only places to warehouse books in floor to ceiling shelves. 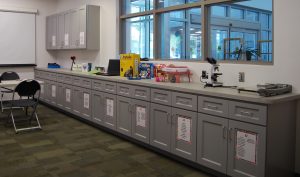 The new makerspace room at the Palmetto Branch Library has a wall of cabinets filled with tools and materials where patrons can create and build projects. The large window faces into the library lobby so people can watch all the activities in the room.

In the middle of the 20th century, libraries rethought their mission and began creating spaces for the community to gather and…

Testing medical protective gear is the perfect job for robots–but not without the help of humans.

THE ARTS: Creative Solutions to Downturn | The Business Journal of greater Keene, Peterborough and Brattleboro